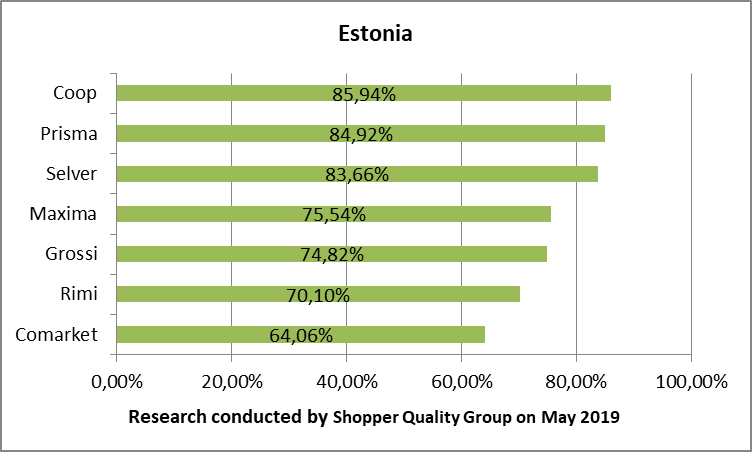 Mystery shoppers assessed the cleanliness and order in the stores, employee appearance, beginning of contact, communication and professional skills, end of contact and additional sales skills. According to the results, in Lithuanian supermarkets you should encounter a clean, orderly environment and tidy, uniform-wearing employees:  cleanliness and order (87%) as well as employee appearance (85%) criteria were met almost fully in Lithuania. A bit of a downfall is noticeable when considering employee and customer communication: it is visible from the results that employees avoid making eye contact with the customer and often forget to say goodbye.

In comparison to Estonia, similar tendencies come to light: cleanliness and order (95%) aspect received the best results in Estonia as well. What differs is the beginning of the contact (93%) criteria that scored especially high in Estonia. Though, Estonian supermarket employees found it difficult as well to effectively end the contact with a customer (77%).

“Overall averages look pretty adequate but what these numbers actually mean is that the quality of service that the customer receives is quite average.” - states Neringa Kazlauskienė, board member of Shopper Quality Group.

Additional sales was notably the weakest aspect of customer service in both countries. It’s at the very bottom of the result list with only a 24% rating in Lithuania, and 20% in Estonia. This exhibits a very poor result.

The research was conducted in five biggest Lithuanian and four Estonian cities. What is prominent as well is that the quality of service ranges from city to city in both countries. In smaller towns such as Šiauliai or Panevėžys customers are served better than in the capital Vilnius that came in third, or in Kaunas - second biggest city of Lithuania - that came in almost last. The situation is very similar in Estonia: first place went to Tartu, while the capital Tallinn was also third according to the results.

View all posts by: slejai